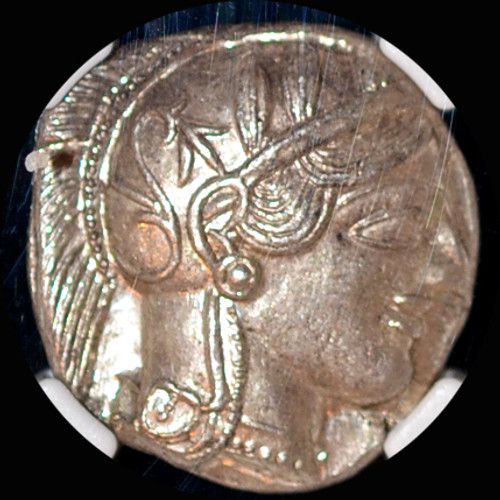 Attica, Athens 440-404 BC Silver Tetradrachm (17.20g) NGC MS 5/5 Strike - 5/5 SurfaceObverse- Head of Athena right, wearing crested helmet ornamented with three olive-leaves and floral scroll. Reverse- Large OWL, olive sprig with berry and crescent in upper left field, AΘE to right. The inscription "ΑΘΕ" is an abbreviation of ΑΘΕΝΑΙΟΝ, “of the Athenians”. Athens was a great military power in ancient Greece and is considered the birthplace of Western civilization and democracy. After defeating the Persians at the Battle of Marathon in 490 BC, Athens was brought into a golden age. During this period of prosperity, Athens expanded its political and economic influence throughout the Greek world, allowing artistic and intellectual progress to flourish at a rate which has never been matched. Their military and naval strength was aided significantly by their influx of funds from the mining of silver at Laurion. The quantity of silver controlled by the Athenians allowed them to mint the authoritative coinage of ancient Greece, the thick and heavy Athenian “owl” tetradrachm, which remains the most recognizable ancient coin today. This coin was the largest silver coin of its time.President Theodore Roosevelt kept an owl tetradrachm in his pocket and was inspired to order the redesign of the U.S. coinage in the 20th century. Buy with confidence - this is the coin you will receive.

Highest and only one graded by PCGS, lovely toning!

This item is exceedingly rare, and should not be missed. Signed boldly on the front in purple grease