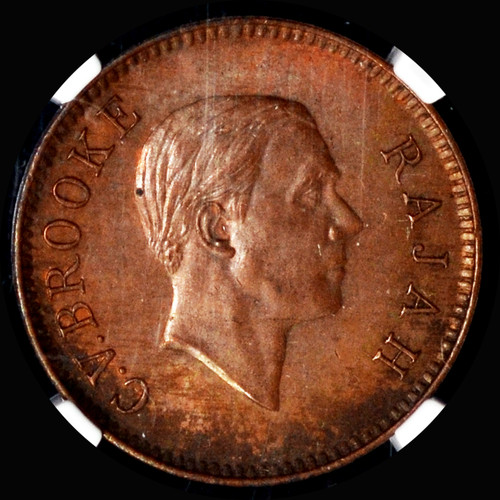 The one cent coin was the most popular denomination of the Sarawak dollar. The 1941 issue is the last date when the denomination was minted. These coins never made it into circulation though due to the outbreak of the war - the ship carrying the shipment of coins to the colony was sunk by the Japanese; very few examples (estimated about 50) have survived.

Japanese occupation forces replaced Sarawak currency with their own invasion currency in 1942. After the war, Sarawak did not regain independence and eventually became one of the states forming the Federation of Malaysia.

Reverse: The value and denomination ONE CENT are in two lines within a wreath of two olive branches; around above, SARAWAK; below the wreath, the date 1941. The mint mark H of the Birmingham Mint (previously known as Heaton and Sons) is above the date.

Unlike the 1920 issue, the design is like that of earlier one cent coins.