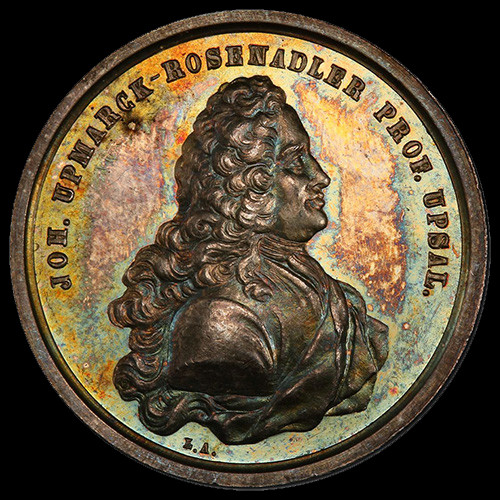 Johan Eriksson was born in Uppsala, where his father Erik Hansson Ångerman was an innkeeper and councilor. Mother, Maria, born Folcker, belonged to a well-known bourgeois family. Johan and his brother Hans took the family name Upmarck after the city; later it was changed to Upmark by descendants. The family originally came from Själevad where they belonged to the common people. Johan was also a brother-in-law to Zacharias Esberg the Elder and uncle of Zacharias Esberg the Younger.

Johan Upmarck Rosenadler married in 1714 Eva, born Schwede, who was the daughter of Professor Johannes Schwede and Brita Behm. Mother Brita Behm was the sister of Emanuel Swedenborg's mother, as well as sister-in-law with Archbishop Erik Benzelius d.y. The couple had a son, President Carl Albrekt Rosenadler.

After his dissertation at Uppsala University in 1688, Johan Upmarck traveled to the continent on study trips. In 1696 he returned, and was appointed assistant professor, and already after two years he succeeded Obrecht as professor of shooting, and thus became the first Swede in that position.

In 1716 he left the post and took over as censor librorum. He was knighted in 1719 under the name Rosenadler. In 1722 he became Chancellor, and in 1737 Secretary of State.

Rosenadler was known as the foremost rhetorician in the Nordic countries. His private library was donated to Karlstads gymnasium.

The above information was goolge translated from https://sv.wikipedia.org/wiki/Johan_Upmarck_Rosenadler

Only 1 graded by PCGS. The Exposition Universelle of 1855 was an International Exhibition held on th

Highest and only one graded by PCGS, lovely toning!

Highest and only 1 graded by PCGS.  Austria: Franz Joseph I silver Specimen "Horse Breeding" Me