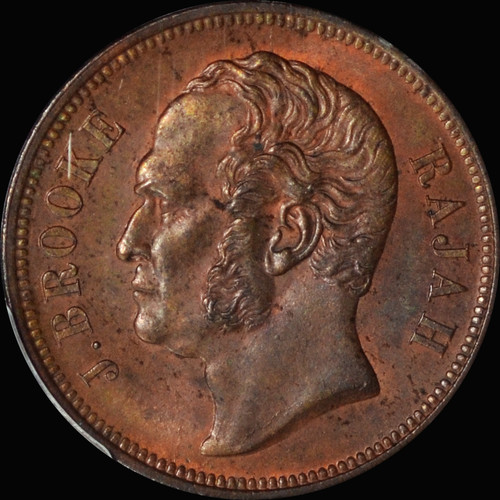 KM-3; Pr-31. Even color with much underlying orange showing through the tone. No major marks and quite attractive for the assigned grade.

Sarawak (/səˈrɑːwɒk/; Malay: [saˈrawaʔ]) is a Borneo state within Malaysia. The largest among the 13 states, with an area almost equal to that of Peninsular Malaysia, Sarawak is located in northwest Borneo Island, and is bordered by the Malaysian state of Sabah to the northeast, Kalimantan (the Indonesian portion of Borneo) to the south, and Brunei in the north. The capital city, Kuching, is the largest city in Sarawak, the economic centre of the state, and the seat of the Sarawak state government. Other cities and towns in Sarawak include Miri, Sibu, and Bintulu. As of the 2021 census, the population of Sarawak was estimated more than 3,248,100. Sarawak has an equatorial climate with tropical rainforests and abundant animal and plant species. It has several prominent cave systems at Gunung Mulu National Park. Rajang River is the longest river in Malaysia; Bakun Dam, one of the largest dams in Southeast Asia, is located on one of its tributaries, the Balui River. Mount Murud is the highest point in Sarawak.

The earliest known human settlement in Sarawak at the Niah Caves dates back 40,000 years. A series of Chinese ceramics dated from the 8th to 13th century AD was uncovered at the archaeological site of Santubong. The coastal regions of Sarawak came under the influence of the Bruneian Empire in the 16th century. In 1839, James Brooke, a British explorer, arrived in Sarawak. He, and his descendants, governed the state from 1841 to 1946. During World War II, it was occupied by the Japanese for three years. After the war, the last White Rajah, Charles Vyner Brooke, ceded Sarawak to Britain, and in 1946 it became a British Crown Colony. On 22 July 1963, Sarawak was granted self-government by the British and subsequently became one of the founding members of Malaysia, established on 16 September 1963. However, the federation was opposed by Indonesia, leading to a three-year confrontation. The creation of Malaysia also prompted a communist insurgency that lasted until 1990.

Brooke was born and raised during the Company Raj of the British East India Company in India. After a few years of education in England, he served in the Bengal Army, was wounded, and resigned his commission. He then bought a ship and sailed out to the Malay Archipelago where, by helping to crush a rebellion, he became governor of Sarawak. He then vigorously suppressed piracy in the region and, in the ensuing turmoil, restored the Sultan of Brunei to his throne, for which the Sultan made Brooke the Rajah of Sarawak. He ruled until his death.

Brooke was not without detractors and was criticised in the British Parliament and officially investigated in Singapore for his anti-piracy measures. He was, however, honoured and feted in London for his activities in Southeast Asia. The naturalist Alfred Russel Wallace was one of many visitors whose published work spoke of his hospitality and achievements.

NGC MS64 1941 Sarawak 1 Cent - RARE!!! The one cent coin was the most popular denomination of the Sa