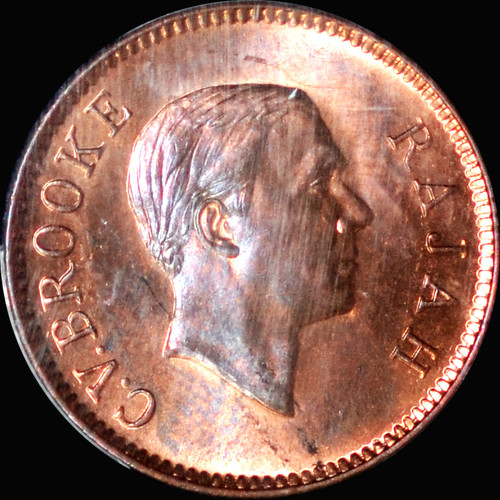 This coin is the only 1 in the PCGS population report, Very rare!

Sarawak (/səˈrɑːwɒk/; Malay: [saˈrawaʔ]) is a Borneo state within Malaysia. The largest among the 13 states, with an area almost equal to that of Peninsular Malaysia, Sarawak is located in northwest Borneo Island, and is bordered by the Malaysian state of Sabah to the northeast, Kalimantan (the Indonesian portion of Borneo) to the south, and Brunei in the north. The capital city, Kuching, is the largest city in Sarawak, the economic centre of the state, and the seat of the Sarawak state government. Other cities and towns in Sarawak include Miri, Sibu, and Bintulu. As of the 2021 census, the population of Sarawak was estimated more than 3,248,100. Sarawak has an equatorial climate with tropical rainforests and abundant animal and plant species. It has several prominent cave systems at Gunung Mulu National Park. Rajang River is the longest river in Malaysia; Bakun Dam, one of the largest dams in Southeast Asia, is located on one of its tributaries, the Balui River. Mount Murud is the highest point in Sarawak.

The earliest known human settlement in Sarawak at the Niah Caves dates back 40,000 years. A series of Chinese ceramics dated from the 8th to 13th century AD was uncovered at the archaeological site of Santubong. The coastal regions of Sarawak came under the influence of the Bruneian Empire in the 16th century. In 1839, James Brooke, a British explorer, arrived in Sarawak. He, and his descendants, governed the state from 1841 to 1946. During World War II, it was occupied by the Japanese for three years. After the war, the last White Rajah, Charles Vyner Brooke, ceded Sarawak to Britain, and in 1946 it became a British Crown Colony. On 22 July 1963, Sarawak was granted self-government by the British and subsequently became one of the founding members of Malaysia, established on 16 September 1963. However, the federation was opposed by Indonesia, leading to a three-year confrontation. The creation of Malaysia also prompted a communist insurgency that lasted until 1990.

The son of Charles Brooke and his wife Margaret de Windt (Ranee Margaret of Sarawak), Vyner was born in London and spent his youth there, being educated at Clevedon, Winchester College, and Magdalene College, Cambridge. He then entered the Sarawak public service.

In his military career, he was commissioned as a Second Lieutenant into the 3rd County of London Yeomanry (Sharpshooters) on 12 May 1911, but resigned from the (County of London) Battalion (Artist's Rifles) on 21 May 1913. During the First World War he served incognito as a rating in a naval anti-aircraft defence unit, and as a fitter in an aeroplane manufacturing works at Shoreditch, East London.

He was granted the personal style of His Highness by command of King George V, 22 June 1911. It was in the United Kingdom he met and married The Hon. Sylvia Brett, daughter of Lord Esher, on 21 February 1911. They returned to Sarawak.

Following the death of his father, Vyner succeeded on 17 May and was proclaimed Rajah on 24 May 1917 at Kuching. He took the oath before the Council Negri on 22 July 1918. Vyner's early years as Rajah (a role he performed in tandem with his younger brother, Bertram, in accord with their father's wish) saw a boom in the Sarawak rubber and oil industries and the subsequent rise in the Sarawak economy allowed him to modernise the country's institutions, including the public service, and introduce a penal code developed on British India lines in 1924.

Granted a knighthood in 1927, Vyner continued to run a hands-off and relatively popular administration that banned Christian missionaries and fostered indigenous traditions (to an extent; headhunting was outlawed). Sarawak, however, was not immune to Japanese imperial ambition, which manifested itself in Sarawak on 25 December 1941. In that same year, he withdrew £200,000 from the Treasury for his personal expenses, in exchange for limiting his powers by a new constitution. Vyner and his family were visiting Sydney, where he would remain for the duration of the war.

The Daily Telegraph described him as "a cloud-living Old Wykehamist, ... one of the few monarchs left in the world who could still say l'Etat, c'est moi." Similarly, his Who's Who entry read thus: "Has led several expeditions into the far interior of the country to punish headhunters; understands the management of natives; rules over a population of 500,000 souls and a country" 40,000 square miles (100,000 km2) in extent.

NGC MS64 1941 Sarawak 1 Cent - RARE!!! The one cent coin was the most popular denomination of the Sa